Jim Marshall of Marshall Amplification has passed away

Jim Marshall of Marshall Amplification has passed away, my friends. This is a sad day for the loud ones. Condolences to all Marshall Family. 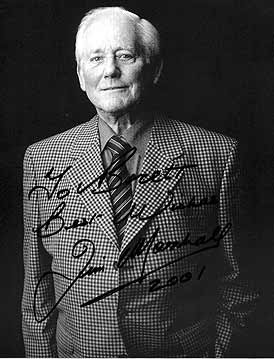 "I really like my old Marshall tube amps, because when they're working properly (i.e., when the volume is turned up all the way), there's nothing can beat them, nothing in the whole world. It looks like two refrigerators hooked together....."

While it's hard for most of us to imagine now, there once was a time when rock and roll and all of its associated trappings simply didn't exist. Dance bands and "Big Bands" were the rage along with wholesome family entertainment and cabaret shows. Black and white television was still a big deal and to stay out after the pubs had closed was almost bohemian. Now we've got colour television, MTV, birth control, jets, divorce, mortgages, two car families.
And rock and roll.
There are probably many people who have played a part in both of these eras, but surely few so significantly as Jim Marshall. It has always amazed me how such a quiet and unassuming man as Jim should become involved in a wild and frenzied business like rock, let alone to have contributed to such a violent assault on music lovers' ears with the invention of the "stack". But he has never led what you could call an ordinary life. He was born in Kensington on the 29th of July, 1923 to Mrs. Beatrice Marshall and her husband Jim. Unfortunately, he suffered from tuberculosis of the bones which meant that he was in plaster cast from his ankles up to his armpits during most of his school years.
He managed just eight weeks at school before leaving at the age of thirteen and a half to start a variety of jobs. His father owned a fish and chip shop in Western Road, Southall, but it wasn't for Jim, so he started drifting around and found work as and where he could. He worked in a scrap metal yard, a builder's merchant, as a baker in a biscuit factory, a "boiler" in a jam factory, a salesman in a shoe shop and as a meat slicer for a canned food group where he sliced off the top of his thumb!
Yet all this time he seemed to have a thirst for knowledge and had started reading books on engineering. Due to his illness he failed his medical for the Forces, so he went to work at Cramic Engineering throughout the Second World War and then he put his new found engineering expertise to good use by working at Heston Aircraft in Middlesex as a toolmaker from 1946 to 1949. However, at the age of 14 he had learned how to tap dance and music was already very much at the forefront of his mind.