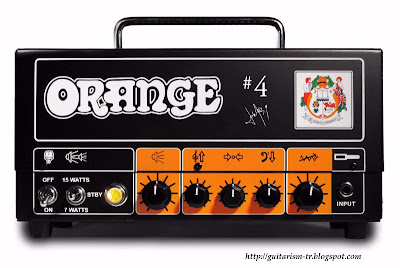 Orange Amplification is proud to announce the Signature #4 Jim Root Terror Head and cab, developed in association with the famed guitarist.

Jim Root has the incredible honour of showcasing his skilful playing with two of today’s best in American hard rock– the multi-Grammy nominated Stone Sour and the Grammy winning Slipknot. He has a wide range of playing styles, which come together to create a unique, uncompromising sound and tone.

The Signature #4 Jim Root Terror Head is modelled after the dirty channel on the same amp that Jim Root plays in the studio and on the road: the Orange Rockerverb 100. This all-tube, 15-watt amp is capable of far more than high gain rock and metal though. With a full 3-band EQ players will find it easy to dial in everything from vintage rock, blues and beyond. The addition of a tube-driven FX loop allows the user to take the tone in any direction they want.

His new Signature #4 Jim Root PPC212 cab has been developed alongside the head to bring you Jim’s full tone! The new cab is finished in black vinyl with a specially developed black version of the Orange basket grill cloth and proudly features the signature #4 plate on the front. With a closed back design, the cab has a tight bottom end and delivers Jim’s signature Orange tone. 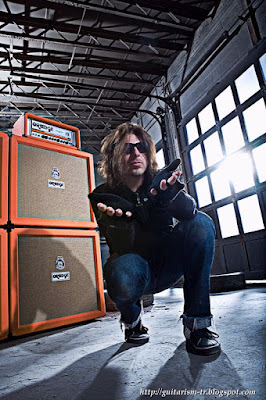 Said Jim of the name on the signature head, "With this amp, simply giving it the number I use in Slipknot seemed logical. I've not been to apt to splash either band logo or artwork all over things, but this will be the beginning of the end of that...maybe"

To complement Jim’s own style and image, the Signature #4 Terror Head is formidable and attention grabbing, featuring the vintage ‘Pics Only’ logo in white on a black chassis. The rear of the amp has both the Slipknot and Stone Sour logos.

This is a simply essential tool for any guitarist from any playing background. Quality built for the huge sound, lush tones and high gain necessary for rock and metal music, but versatile enough to be useful in any situation!