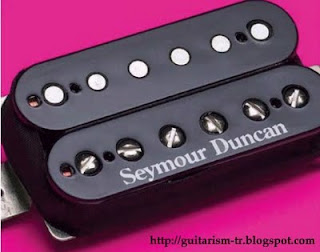 A legend in the whole humbucker history. One of the earliest creations of Seymour W. Duncan. The one we all love to hear on Jeff Becks mighty “Blow by Blow", particularly on “Cause We’ve Ended As Lovers”, the one that has been used most of the “Surfing with the Alien” record of majestic Joe Satriani... This humbucker is still one of the most selling aftermarket pickups. And lets talk about this pickup some more... 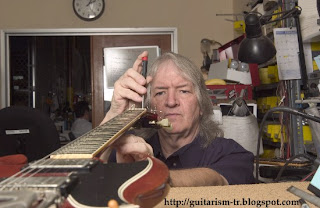 The story begins with the guitar that Seymour Duncan made for Jeff Beck when was in London, 1974. Its better learn directly from Seymour;

I made Jeff Beck's "Tele-Gib" guitar in 1974 during my stay in London while working at the Fender Soundhouse. I was doing guitar repair and modifications and working with many top European guitarists. During the evenings I was recording at Polydor Records and experimenting with guitar sounds.
The "Tele-Gib" started out as a butchered '59 Fender Telecaster that originally had a slab rosewood fingerboard. The body was chiseled out badly and had been through some unearthly modifications by the look of it. It had no pickguard, bridge or other parts that could be used. The Telecaster was found in 1972 at a music store in Cincinnati, Ohio. I took it with me when I left for London to meet Roy Buchanan and his manager, Jay Reich in early 1973. Roy started his European tour in Germany before heading for London. My manager at the time, Norman Vandenberg, also managed Christopher Rainbow (Alan Parsons-Camel and solo albums) saw an ad in a London paper that the Fender Soundhouse was looking for a guitar tech to do repairs. I was doing sessions at night and had free time during the day and decided to apply for the job. I got the job, working with amp whiz Ron Roka who had a repair shop on the main floor of the Fender Soundhouse. The Soundhouse was originally on Tottenham-Court Road in London. Working there was great and I had a chance to meet so many great guitarists that rehearsed on the 3rd floor sound studio. Nearby was CBS Studios where Jeff was recording the 2nd (unreleased) album with Beck, Bogert and Appice. Jeff was playing his Stratocaster through a Fender Deluxe Reverb amplifier set on 10! I remember sitting in the control room and watching Jeff, Tim and Carmine playing live. I believe Andy Johns was engineering and jumping around the studio dancing to the music. I was sitting with Jeff's manager Ernest Chapman as we watched the session being recorded.
The next day I grabbed my old battered Telecaster and started removing the destroyed fingerboard that somebody did a bad fret job on. I made a homemade heating element to remove the fingerboard. I replaced it with a 3/16th of an inch piece of maple and cut the fret slots by hand. I put in heavier Gibson frets with a 13" inch radius. The frets were 18% nickel silver Gibson Les Paul frets. The neck was sprayed with nitrocellulose lacquer I got from master repairman Sam Lee. Sam had a repair and vintage shop with Steve Howe who played in the group "Yes". The neck never had a replacement decal though I've been wanting to put one on for years. I was trying to get the guitar finished quickly as Jeff only had a few more days in the CBS Studios.
The next step was to find some material for a pickguard. My manager Norman found it nearby at a plastic fabrication shop. I cut the shape by hand and got it ready to install the neck pickup.
I had to rewind a broken pair of old Gibson '59 "Patent Applied For" humbuckers that were damaged when the covers were removed. The pickups were from an old smashed '59 Gibson Flying V that was painted black and once belonged to Lonnie Mack. Lonnie often played in Cincinnati, Ohio and lived nearby in the state of Indiana. It was hard finding the magnet wire needed for winding the coils. I found the wire at a motor repair shop and ended up with two different rolls of wire for winding the coils. I used the heavier gauge to wind the neck pickup also because I had only a small amount. I used the finer wire to wind the bridge pickup because I could get extra turns on the bobbins for increased sustain, harmonics and output. 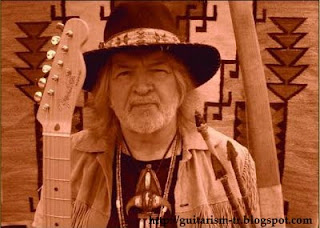 The body was light ash with blond nitrocellulose lacquer finish. I recall the weight to be about 6 1/2 pounds. The pickguard was ready for the neck humbucking pickup and I used the original cream Gibson '59 neck mounting ring for that. I wanted to keep the original cream Gibson '59 bridge mounting ring and found another one for the bridge. I didn't want to cut the '59 cream ring for the bridge position and used it on my "Tele-Gib" I made around 1976. I have my JM-neck and JB proto in the bridge and can be heard on my recordings "King Tone Blues" and "When A Man Loves A Woman". I had to salvage an old Telecaster bridge plate that could be cut to fit the bridge humbucker. I cut the bridge straight across in front of the Fender logo. The front of the plate was smoothed out and rounded slightly. It has 3 early 50's brass saddles given to me by Roy Buchanan in the mid 60's from an old guitar someone gave him. The bridge pickup fit into the recess on the pickguard that I crudely cut. It was made from a dark chocolate brown plastic about .093" thick. It has 5 holes like traditional Tele pickguards and I mounted the neck pickup and mounting ring using 4 Gibson neck mounting ring screws.
The neck pickup is zebra with the cream stud bobbin facing the bridge and the black adjustable bobbin facing towards the neck. The bridge pickup is double cream and an original '59 Patent Applied For humbucker. The 6 adjustable 5/40 fillister screws are adjusted so the bottom of the head is about flush with the top of the bobbin.
The lever switch knob was from a handful that I got from an old telephone switchboard during the mid 60's. The same knob was given to Roy Buchanan and can be seen on the cover of his "Loading Zone" album (Atlantic SD 18219). I gave them to Roy about 1966 when he was playing at a club in Wildwood, New Jersey. The volume and tone control knobs and control plate are from an early 50's Telecaster.
Jeff used the "Tele-Gib" on the "Blow By Blow" album and others after that. He recorded "Cause We've Ended As Lovers" and songs like "Freeway Jam". You can see Jeff playing it on the video "Secret Policeman't Ball". Jeff is my favorite all around guitarist and I can't thank him enough for all the help and friendship he has given me throughout the years. He has many tricks up his sleeve so sit back and listen to what he does! He's the best!

Several years later I wanted to make the same pickups with the winding specs I used on Jeff's "Tele-Gib". I called the neck pickup JM-neck for John Milner whose one of Jeff's favorite characters in the movie "American Graffiti" but later changed to Jazz Model-neck so a player could better indentify with it for it's clean smooth tone. The bridge pickup became the JB because you can play Jazz and Blues with it. Thanks...

(This article is directly taken from this link; please refer the original http://www.ainian.com/jb4.html#2  )

If you read or pass the history part, we can begin to give some technical info about JB; 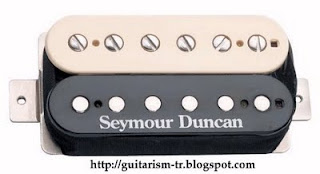 First of all, as an overwound humbucker JB has very typical screaming uppermid characteristic. Bass frequencies are realtively defined but not lots of bass when you play. Trebles are much more than basses yet sound of JB is not clear actually because of the structure of mid frequencies. Mid-mids and as i have said the uppermids are untamed. But still not as wild as Duncans Screaming Demon. Because of this EQ structure this humbucker can be assumed as muddy, relatively. Especially on the guitars with thick bodies and shorter scales, muddiness of bridge position can be problem, if your sound belongs to “my extreme level is overdrive, not distortion” zone. If you turn everything up to 11 on your amp and belong to “bone crushing distortion” zone, forget about it :)

For the guitars with thinner bodies and longer scales, screaming mids may be annoying some occasions, particularly if the guitar has bright tone. Nevertheless this screaming sound can be useful to cut through the mix, even the densest. To use JB convenient as possible, many players including Jeff Beck himself and Seymour W. Duncan, use 250K pots instead of 500K pots that are commonly used with humbuckers.

Another advantage of JB which i love this most, the sound when splitted. Generally, i dont like the sound of splitted humbuckers while i adore true, well-known strat single coil sound. Okay, splitting is always usefull, especially playing live but, i am not the #1 fan of their sound. On the other hand, the splitted sound of JB is truely not bad actually. If your guitar is some kind of stratocaster and have JB on the bridge position, you can have very nice sound, fairly similar to standart single coils when you split. Moreover its sound also nice with the 2nd position; middle single coil and splitted JB on the bridge. As an addition, this especially Works well with powerful single coils like “Texas Special” of Fender.

-) you have balanced guitar,
-) muddiness is not your problem for you
-) you are the ones yelling “i cant hear myself” in the studio rehearsals,
-) play hard rock or harder stuff,
-) you like to play solos,
-) you are looking for brighter sounds to cut through the mix,
-) you look for higher output but do not go for extremes
-) you look for versatility, relatively

Then, give a chance to legendary JB from Seymour Duncan.

-) Your guitar is too bright and dont want to sound much more brighter,
-) perfectly defined, clear clean tones are “must” for you,
-) you want/need something more into “PAF” arsenal,

Then, take beware of JB. But even in this condition, i’d give a shot to JB because sometimes tastes might change or different set ups, different amps, cabs, speakers, pedals may affect a lot and you may see yourself happy with JB in your guitars bridge position.